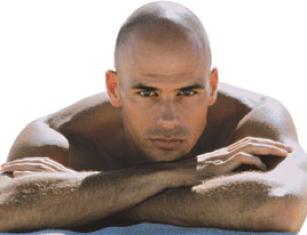 Just three of the world’s sexiest men who just happen to be… bald.

With Australia’s largest medical hair centre Ashley and Martin finding that 60 per cent of men are affected by hair loss, this widespread problem affects many Aussie blokes with sufferers often feeling both confronted and embarrassed.

Chief Executive Officer of Ashley and Martin, Richard Bond believes balding is affecting men of all ages, making younger men feel old beyond their years. “The typical male that we see is around 29 years old and is concerned that by being bald other people will perceive them to be late 30’s,” Richard said.

However, these fears may prove to be unfounded after a recent study of 5,000 Aussie women by Girl Communications found that

What’s not sexy is the manner in which the man deals with his baldness – think a comb over, a toupee or hair plugs with the study showing women were more attracted to a man’s swagger and personality.

So men really need to replace the hair with confidence.

According to Aussie women, balding signifies men who are confident in their own skin – think Jude Law, Kelly Slater, Billy Zane and Tyson Beckford.

Leading Sydney based hair stylist to the stars Alex P F Jackson has come across the problem of balding with many of his male clients during his 20 years in the industry. “Men like to think that they are not vain, but every man cares about his appearance to some degree,” says Alex.

“Men seem to think if they grow their hair the bald spot isn’t as noticeable but little do they know growing it makes it more noticeable so keep the hair short and sharp, treat the symptoms early or embrace the bald look,” says Alex.

· Recognise the symptoms and treat it early

· Seek help from a professional such as your hairdresser

· Explore your options, especially what products are out there

Want to join the discussion?
Feel free to contribute!