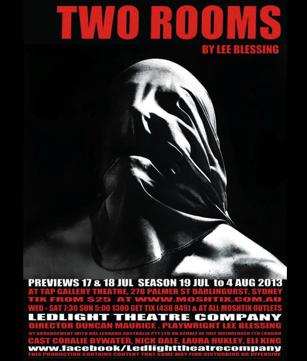 Im so excited to be doing hair on this production…

Come along and experience this story.

Two Rooms, a powerful a story of love, truth, hope and human rights by acclaimed award-winning playwright Lee Blessing will be performed in Australia for this first time in Sydney, this July.

Set in Washington and Beirut in the eighties, Two Rooms tells the personal story of a hostage and his wife forced apart by politics and war, trying to reconnect against all odds.

Voted a ‘Best Play of the Year’ by Time Magazine in its opening year, the Australian production of Two Rooms will be performed by the Ledlight Theatre Company and directed by Duncan Maurice.

“Two Rooms has received critical acclaim internationally since it was first performed in the eighties, and we are thrilled to share this great work by Lee Blessing now in Australia. Whilst the story explores the abuse of human rights and the withholding and releasing of vital information by the media and government, at the heart of it is a triumphant love story,” said the director, Duncan Maurice.

Want to join the discussion?
Feel free to contribute!